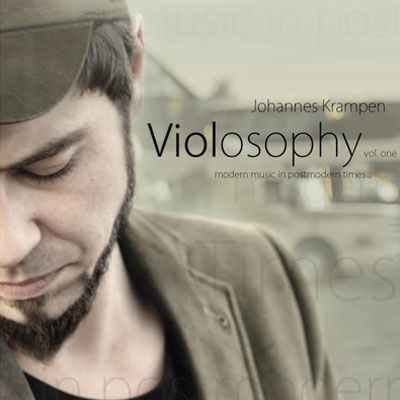 The debut album of the charismatic violinist is a homage to the beauty of the music of the 20th Century and is at the same time a glimpse of his perspective on music and how he approaches it. Sincerity, high technical demand and sound variation are the cornerstones of this album. Narrative and music should be combined so that the performer’s interpretation remains comprehensible.

Beginning with and continuing on from Arvo Pärts ‘Fratres’, sound, music and content merge to an inner flow that supports the varying composing styles and blends them all. Additionally the listener should feel so close as to imagine playing the music him or herself- and thus experience an honesty through directness and being ‘sucked in’ to the music. This is demonstrated best in the composition ‘Through Time and Space – time collapse’ by John Thrower where the listener experiences a real musical ‘time collapse’ (as suggested in the title). The piece lasts 8 minutes but it rushes by and feels like only 4.

Johannes Krampen creates a symbiosis of music, content and manufactured sound. It is all tonal and comprehensible- nothing simple or insignificant. A wonderful combination of compositions: two recording premiers: John Thrower’s ‘Through time and space- time collapse’ and ‘Dream Flashback’, a first publication: Michael Berkeley’s ‘Funerals and Fandangos’ and a rarity from Nikos Skalkottas ‘Sonata for Violin Solo’ complete and compliment the well-known compositions by Arvo Pärt, Olivier Messiaen and Eugene Ysaye.